I was making a left turn, Green light, there’s a truck in the yellow lane. As soon as I was about to pass it he decides to turn and he hits me and after that I don’t remember anything. My wife was pregnant at the time also. My daughter was due the next day. So, the only thing I could think of was my wife and not being able to see my kid. She was going to grow up without a father. I went to the hospital and my wife was freaked out. She called her mom and her mom told us to call Law Tigers. They even came to the hospital when my Harper was being born. They came to me and helped me out. I was really worried about what was going to happen. About what I would have to pay. It was my first accident like that. Law Tigers took care of everything. When Law Tigers showed up I felt relieved. The fact that they know how to ride also. I mean coming to this Law Tiger building and seeing everything about motorcycles. It’s actually pretty great that’s why I trust Law Tigers. So that’s why I came to them. There’s no way I would have done it on my own. So, that’s why I’m glad Law Tigers was there. They helped me out. Call Law Tigers.

It was July 4th of 2015 we were getting out of the heat in Arizona in Phoenix. We rounded a corner and a deer came out of nowhere and knocked us off the bike. We had thirteen broken bones between us. I was helicoptered because my hand was such a mess they thought I was going to lose all or part of it. On the helicopter ride down, I realized: this is not cheap. I was thinking “what am I going to do?” It was going to take away every last dime. I have to pay what I could and take me years to pay off the rest. I got on the phone and contacted three different law firms and the other two law firms never even returned my call. Right from the onset Law Tigers were prompt on the phone, on emails at every turn: “what else can we do what else do you need…” telling me what they needed in order to complete the process that we were going through. Law Tigers was everything for me. They made all the difference. They jumped in between me and the creditors. They took all the bullets. They did all the heavy lifting that I could never have, I would have never known what to do. Law Tigers knew exactly how to handle it and they wanted to help. And at every turn they were like: “what can we do next” and “do you need anything else from us” and “let us know if you have any concerns.” Law Tigers was great.

February 2nd 2012 5:34 in the morning. I was on my way to work on the I-10. A guy cut across four lanes of traffic. He missed a couple cars and didn’t see me. My first, I would say week and a half maybe two weeks in the hospital I had no idea what was going on. A very good friend of mine called Law Tigers. Absolutely, Positively everything was taken care of from day one. I never made a phone call once to anybody. I never worried about anything. Quite honestly I don’t know that I was even in any shape to worry about it. I believe my hospital bills were somewhere in the range of a million to 1.2 million. Something like that. It took a long time for them to negotiate down to where it was at when it was all said and done. I believe they took a 1.2 million dollar bill down to $400,000. It was completely 100 % taken care of by Law Tigers. Their billboards are all over the place. We have a thing we have to do every time we go by one. You know, we have to do a little prayer and give them back a little, because had it not been for the Law Tigers I would not have anything that I have today. A very good friend of mine was just hit and he called me and I said: “Scotty call Law Tigers” as I don’t’ know where would I be without them!

There was no impact. Full Speed. Hit a curb. I came of the bike and was in the road. My lower leg was broke in half. I have never had any experience before with any type of legal situation. My paralegal was very patient. She explained everything to me and I just left everything in her hands. And she understood my situation; She understood what I was going through. And however she prepared everything it worked out perfectly. It has been a great experience. My job is physical. I have to walk. I have to move around. I actually started getting worse after that. Talking to my paralegal. I’m like I can’t go farther with this until I can make sure that I can recover the best that I can. So, they were very patient with me preceding farther until I got to the point that I was comfortable with saying Okay lets finish this now. Law Tigers worked on my time line as far as where I needed to be physically in my recovery. They did not try to rush me to get this done. They educated me on my legal rights. My time lines so we could still accomplish the same goal within the amount of time that we had. I got the best I got the Law Tigers. There was no need for me to think about going anywhere else.

Heading to work and I merged into the carpool lane. Ahead of me I heard screeching tires and I saw a bill of smoke and I started slowing down but before I knew it the impact occurred. My families never been one to use lawyers but once I evaluated the severity of my injuries I didn’t trust the insurer to do the right thing. I came across Law Tigers and my gut told me to just give them a try. I’ll tell you what it was one of the best decisions I’ve ever made. I think the main thing was Law Tigers helped deal with all the headaches. All the things I would have had to deal with otherwise. I was drained and Law Tigers just stepped in and took care of everything from A-Z. Businesses like this don’t thrive unless they are doing the right thing. They can advertise all they want. And I’ve seen a lot of others but you don’t see them with all the history and track record and the consistency. That’s what brought me here. Law Tigers called each individual billing agency, doctors’ office, physical therapist, hand specialist. They called every single individual that was trying to put forward these inflated bills. And they got them to cut their bills in half or more. That really helped me keep more of the settlement that has served to offset all of the expenses of everything I’ve been through. I feel like things have kind of been set right. You know. And I know I could not have counted on the insurer to the right thing. They have gone above and beyond. Exceding my every expectation. If you are in a motorcycle accident. Don’t give it a second thought. Call Law Tigers. 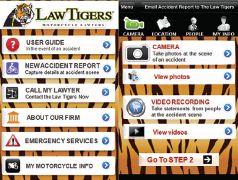